When it comes to breast cancer, don’t suffer in silence

When it comes to breast cancer, don’t suffer in silence

Breast cancer should not be endured alone. By opening up to people you trust in the workplace, you'll discover a healing outpouring of support.

My name is Diana Buxton, and I am a breast cancer survivor.

Although one in eight women will be diagnosed with breast cancer, I never thought it would be me. I’ve had a fortunate life. But cancer doesn’t discriminate – it does what it wants and to whom.

In June 2019, I discovered a lump. I panicked but hit the tennis court anyway, hoping it would magically disappear. It didn’t. I knew women who had battled breast cancer. Most survived; some did not. I knew how to play the role of advocate, supporter and friend, but not patient.

Maybe that’s why my first inclination was to take this journey alone, keeping work rather than myself as my main priority. I plowed ahead, attending the Travelers Championship golf tournament, a high-profile client event in Connecticut. I told two colleagues that I needed to drive back to New York early for a meeting, when in fact, I was headed to the Evelyn H. Lauder Breast Center the next morning.

Not even my husband knew. I walked into the cancer center with a doctor’s order and a bundle of nerves. A sonogram showed a suspicious area, and a biopsy confirmed I had breast cancer. I finally told my husband and immediate family.

I met with a surgeon and scheduled surgery, relieved it wouldn’t interfere with a presentation I was scheduled to give at a corporate event the day before. Although I took two days off that week, four days later I attended a going-away party for a work colleague. I maintained my “work-first” mode, never thinking to share what I was going through and take care of myself first.

The tumor was twice the size the surgeon expected, and two lymph nodes were positive, which meant more surgery. I took two days off for surgery but still told no one else.

When I learned I had to start chemo, my first thought was, “How am I going to balance work with treatment and my home life?” There were numerous leadership changes going on, and I was afraid to take time off for “fear of missing out” (FOMO in today’s parlance). And because a major industry event was taking place at the same time I was supposed to start chemo, I convinced the oncologist to let me start two weeks later.

The Power of Workplace Support

Once chemo became part of treatment, I knew I couldn’t keep it secret any longer. I planned to continue to go to the office, and I had to shave my head and wear a wig. I knew chemo would leave me feeling awful, and people needed to understand why. I told my boss first, which was such a relief I decided to tell everyone. I didn’t want to suffer in silence any longer.

I powered through chemo and radiation with the tremendous support of my colleagues, friends and family. I felt so grateful to work with a leadership team that was actively supportive and understanding. When Cognizant recognized Breast Cancer Awareness Month by sponsoring the Tech Day of Pink program with Estee Lauder, my boss ordered pink t-shirts with a ribbon that said, “Team Diana #buxtonstrong” and distributed them to my team and CMO peers. Numerous people posted photos on social media of themselves wearing the pink t-shirts. It was an amazing, and very touching, outpouring of support. 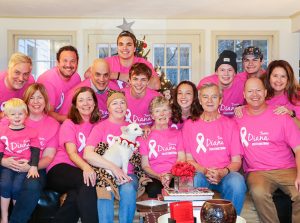 COVID hit before I finished radiation, and suddenly everyone was working from home and meeting via videoconference. By the end of June, my hair had grown to about an inch, and I stopped wearing a wig or caps on calls. Jaws dropped when people saw me, but Cognizant is all about transformation, so I told them they would have to go through the hair transformation with me. I had reached out for support, and it felt good.

By June 2020, I was finally on the road to recovery, and good things happened. I had been awarded a position on the board of the Women’s Bond Club, and I learned I was a finalist for a prestigious marketing excellence award based on a campaign my business unit launched in four weeks – during June 2019. No more FOMO.

I share my story to encourage those of you who’ve experienced breast cancer personally or who have loved ones with cancer to share yours. Fear is a given, and sharing can help keep you from suffering in isolation. After learning I had cancer, several women survivors and male colleagues revealed similar diagnoses that their wives, mothers or sisters had, which allowed me to pay forward some of the support I received.  So, open up to your manager and team or others you trust in the workplace – their support will astound you.

And know that my virtual door is always open. Please don’t hesitate to knock.

Diana Buxton is the CMO of Banking, Capital Markets and Insurance at Cognizant. In this role, she and her team focus on...