The power and impact of managerial allies

The power and impact of managerial allies

Managers have the greatest impact on a sense of belonging, according to Gen Y and Gen Z employees across a range of under-represented groups.

Increasingly, allyship — standing up for, supporting and actively advocating for others who are different from ourselves — is being promoted as a tool to support diversity, equity and inclusion (DE&I) efforts. But so far, there’s been little empirical research examining who the most effective allies are and what they can do to create a culture of belonging in the workplace. To answer that question, this past June we surveyed over 3,000 Gen Y and Gen Z individual contributors in the US.

While anyone can be an ally, the majority of respondents in our study (70%) say the person with the greatest impact on feelings of belonging is their manager. Because under-represented groups can face greater challenges to organizational entry, advancement and promotion, managers as allies can play a critical role in support of early careers. 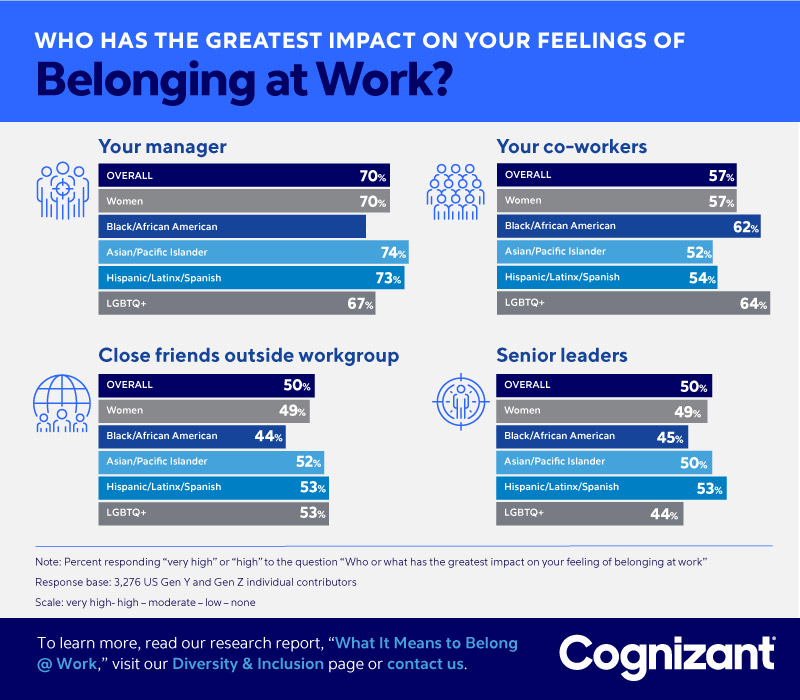 As a female client recently shared, “I have allies in many places, but as I think back, when my manager was my fiercest ally, he is the one that created a real launching pad for my career.” Managers are that pivotal connection point between the organization and the employee.

The most powerful actions managerial allies can take

All under-represented groups expressed similar thoughts as to what, specifically, managerial allies can do to materially impact a sense of belonging, although there were differences of intensity among the groups’ responses. Our analysis found that managers exert the greatest impact on belonging when they do the following:

Organizations that place a strong strategic emphasis on developing managerial allyship skills will ultimately create a culture of belonging. By being an ally, managers can significantly increase employee motivation, commitment, emotional and physical well-being, overall engagement and retention — all of which will lead to greater innovation and productivity.

When it comes to attracting, growing and retaining the diverse talent they need to survive and thrive in the future, organizations can rely on managerial allyship to deliver.

For more on this topic, see “Diversity, Equity and Inclusion through a Gen Y/Z Lens” and “The Great Resignation: It’s Time to Restart the Belonging Engine.”

The Modern Business newsletter delivers monthly insights to help your business adapt, evolve, and respond—as if on intuition