When we learned our son was born with Down Syndrome, we threw out the traditional view of achievement and focused on what Isaac would achieve for himself.

On a cold and cloudy January day in Portland, Oregon, I gave birth at home to my first child, a boy. He was perfect, and perfectly healthy, with all fingers and all toes, just as we had wished. We named him Isaac, which means, “he laughs.”

And so did the universe.

By six months, it was clear Isaac wasn’t meeting typical milestones. After being repeatedly assured he was still developmentally “in range,” my husband and I prevailed upon our pediatrician to order a karyotype test, which counts and sorts the number of chromosomes.

Our intuition was right: Isaac has three instead of two copies of the 21st chromosome, also known as Down Syndrome. Down Syndrome is the most common genetic cause of learning disabilities in children. It isn’t inherited, except in rare cases, and occurs in about 1 of 700 births across all races.

The diagnosis shattered our illusion of normalcy. Our questions ranged from the near-term – will he be able to talk? Should we continue teaching him Mandarin? – to the more profound –who would take care of him if we died? Should we have more children? The worst question was: what if we outlive him?

I’d always felt comfortable with uncertainty. But this was uncertainty on another scale entirely: I couldn’t think or research or iterate my way out of it. In fact, the more research I did, and the more people I spoke to, the more it seemed there were no “best practices” or clear paths forward.

And therein was the unlock. Without any standard templates, it meant we could proceed with the parenting philosophy we’d always intended to have: to encourage our children to achieve to the best of their ability.

But there was an adjustment. Subconsciously, we had equated “ability” with “achievement” as lived through our own lives. Both my husband and I are high achievers. We assumed our children would be like us, and we would take pride in their accomplishments just as our parents did in ours.

Isaac’s diagnosis laid bare the selfishness in that bias: It shouldn’t be about how Isaac would reflect on us but about what he would achieve for himself. We threw out the personal and societal measuring sticks, and it was liberating.

Today, Isaac is an articulate 11-year-old with an impish sense of humor and an exceptional throwing arm. He has an amazing memory for names and faces and facts and figures. He’s a strong reader and has just learned how to read Hebrew – a feat that has me second-guessing my decision to stop teaching him Mandarin as a baby. 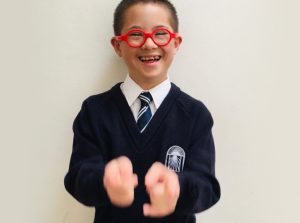 But teaching him new concepts takes enormous patience and repetition, sometimes to the point of exasperation. His behavior is often challenging: he has little sense of physical boundaries and swears like a seasoned sailor. He’s incredibly stubborn and is mostly immune to logic.

In short, his diagnosis still looms. We moved countries to be closer to family. My husband set aside a successful career to stay home, in part to make sure Isaac’s neurotypical younger brother also gets enough attention (and lives up to his abilities). Wherever we go, we have to coordinate a circle of trusted educators, advisors and backup caregivers.

Yet we are the lucky ones. We’re grateful he’s healthy – roughly 50% of children with Down Syndrome have congenital heart defects. We have financial resources and a steady income. We have the skills to navigate the world of special needs and better understand Isaac’s distinct learning style.

The most profound gift, though, is seeing the world through his eyes. He loves hugs – for him, the reassurance of human touch matters. Patience matters. And above all else, kindness matters.

These are universal human needs. Isaac makes sure we never lose sight of them.

National Disability Employment Awareness Month is celebrated throughout the U.S. in October.

Irene Sandler is Vice President of Marketing at Cognizant Technology Solutions. She leads the Global Messaging and Portfolio...

Although no one’s quite sure what the post-pandemic workplace will ultimately look like, one thing is already clear: How I...

Workplace support is vital for those on a transition journey

The very day I came out as a transgender woman to my supervisor and my client, both immediately began using my new name...

How to be an ally to transitioning and transgender people

When my son transitioned, society wasn’t talking as widely as it is now about gender issues. The TV show Transparent was just...