WEF 2017: a manifest destiny of machines

WEF 2017: a manifest destiny of machines

The work that got us to the present won’t get us to the future because the digital economy requires completely different skill sets and attitudes.

As we approach this year’s annual meeting of the World Economic Forum, a new economy – a digital economy – is emerging from the red hot furnace of technological innovation. An economy based on artificial intelligence, algorithms, “bots” and instrumented “things” is taking shape and, in the process, generating huge new money from ideas that represent the future.

This reality is at the heart of the World Economic Forum’s 47th global gathering of leaders in politics, business, academia and the arts. The event comes at a time when generational orthodoxies are being questioned and views of the future hotly contested, around the world.

The irony that Tuesday’s opening sessions – which will no doubt vigorously defend a vision of globalization and economic liberalism – is occurring in the same week as the inauguration of President Donald Trump will, undoubtedly, be lost on no one.

Four Macro Forces at Play in the Digital Economy

We Need to Figure Out How the Future of Work Works

With machine intelligence developing at exponential rates, and the near-term ability for machines to do everything we can today, it’s never been more pressing to figure out how the future of work works.

According to recent research from Cognizant’s Center for the Future of Work, executives understand that this is no theoretical exercise. Though we have been musing philosophically (and artistically) on the promise and peril of robots for eons, the time for debate is over; now we need to figure out What To Do When Machines Do Everything. 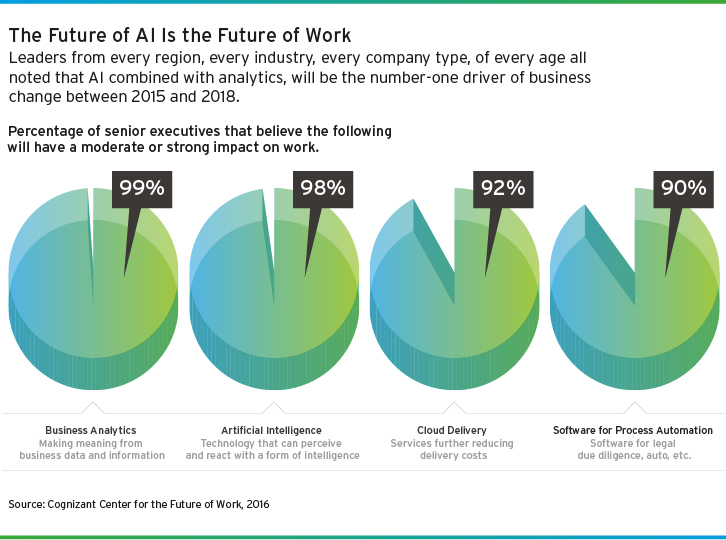 Source: Worldwide survey of 2,500 executives conducted by Cognizant Center for the Future of Work, Q1 2016

This rapidly unfolding AI-driven era is exposing a gap among employees in organizations around the world: those who embrace the possibilities of the next wave of technology, and those who fear the risks. Ensuring that you (and your team and your organization) are on the right side of this schism is Job 1 for everyone.

Although digital business is over 70 years old (counting from 1946, when the first general-purpose computer, ENIAC, was launched), the “digital revolution” is only kicking into high gear now. Most of us have worked with computers all of our working lives, but in many ways, we’re only just beginning to understand what truly digital work is. The future won’t see us trying to replicate old ways of working with new tools; it will create entirely new ways of working, created by the new tools.

Consider that while e-mail aped the memo (have you forgotten what “CC” stands for?) Slack Software completely does away with memories of typing pools and vacuum tubes and enables communication as though everyone were sitting around the dinner table on a Friday night. And whereas Excel was spawned from Dickensian actuarial offices, Tableau Software was born by people wearing flip-flops in a computer science class in California. In the next AI-catalyzed wave of digitization, work will be reimagined, remixed and reborn as something fit for our kids rather than primed for the nursing home.

The new frontiers under discussion in Davos aren’t simply about substituting labor with software; they’re about building the new machines that will allow us to achieve higher levels of human performance. As Kris Hammond, CTO of Narrative Science – a pioneer in natural language generation – puts it, “AI is not a mythical unicorn. It’s the next level of productivity tool.”

Davos 2017 couldn’t have come at a more consequential juncture. Exhilaration (and terror) won’t only be found out on the slopes.

Follow @Cognizant on Twitter to stay on top of Cognizant’s participation in this year’s World Economic Forum. Or, reach out to me directly on Twitter @BenjaminPring while I am in Davos.

Ben Pring is the Head of Thought Leadership at Cognizant, and co-founded and leads Cognizant’s Center for the Future of Work....

Why digital projects derail – and how to keep them on-track

If you were about to get on a boat or an airplane, and someone told you there was a 70% chance your journey was going to turn...

COVID has amplified the call for agility and collaboration

One year ago, we published Transforming While Performing: How To Create A Culture Of Innovation With Partners. Little did I...

What the world needs now – and even more during the pandemic: chunkers

Over the past two years, when I’ve asked business, digital and IT executives what critical skill or talent they most sorely...