Every move you make: privacy in the age of the algorithm

Every move you make: privacy in the age of the algorithm

As consumers grow wary of how much data they're willing to share, a new world order hinges on how companies and governments respond to the issue of privacy.

Traffic congestion marked by thick red lines on a Google Map.  A browser that remembers your credit card code. Tracking down a long-lost friend via social media. The benefits of sharing our personal information – personal recommendations, customized experiences, lightning-fast convenience – are everywhere.

But when news headlines break on terrorists hunted down by drones tracking their cell phones, a suspect caught at a concert through facial recognition technology or an alleged serial killer apprehended using a relative’s DNA data from a website – you start to feel the tables turning on our attitudes toward privacy and how much we’re willing to blithely share. (Bad guys gone, yay!  But can that “eye in the sky” see me? – Hmmm….)

Today’s digital age is the proverbial double-edged sword, and our privacy is increasingly the hilt of that blade. With every click and like and swipe we make online, our interests, preferences and intent are revealed.  The ubiquity of location-based sensors, facial recognition and social and mobile computing have made consumers something of a chassis within this world, and subject to vast – and lucrative – analysis every day. 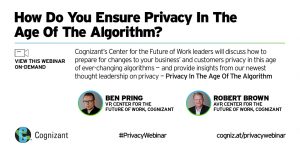 While the “Code Halo” has brought us great joy and happiness (and a surfeit of cardboard boxes) – and given rise to a new class of business leader (Bezos, Zuckerberg, et al) – its “dark side” is becoming more and more apparent, and the potential for dystopian nightmare is increasingly well understood.

As The Police sang in the ‘80s, “every move you make” in the online world is visible to not only those we trust but also those we don’t know.

After 25 years of regulatory-light experimentation with the “information superhighway,” policy makers are only now beginning to lay down some “rules of the road” pertaining to data privacy.  If data is the new oil, the fervor over events like Facebook’s dealings with Cambridge Analytica is a gusher that needs to be contained.  And like the Deepwater Horizon and Exxon Valdez did for the oil industry, regulation for the tech industry looms large.  As Europe’s General Data Protection Regulation (GDPR) goes into effect, the first phase of the Internet – the Wild West Days – comes to an end. Indeed, we believe a new world order hinges on how companies and governments respond to the issue of privacy.

New guidance from the Cognizant Center for the Future of Work examines this important moment of transition and provides analysis, advice and insight for organizations around the world that need to respond to the changes ahead:

In congressional testimony recently, Senator Dick Durbin asked Facebook CEO Mark Zuckerberg if he’d share the name of his hotel where he stayed the night before and the names of people he’d messaged in the last week.  "Senator, I would probably not choose to do that publicly here," Zuckerberg said.  To which Durbin responded, "I think that maybe is what this is all about: your right to privacy.”

Simply put, you and your teams need to ask, “Can we answer the ‘Durbin Question’ on privacy going forward?”

Is your organization prepared for the future of privacy? Is it ready for the consumer backlash that inevitably follows misuse of personal data, wittingly or otherwise? What price are organizations, individuals and governments willing to pay to protect consumers’ online privacy?

To help make sense of all these swirling issues, companies would benefit from a list of strategic actions to START doing and to STOP doing to flourish in the new age of data privacy. Stay tuned: Our new report, to be released on the eve of GDPR going live, provides that, and more. We will further discuss these issues in a live streaming video webinar.

While the fundamentals of these imperatives have always been with us, the future now rests on how we treat and manage data. The long view of the future of privacy is that corporate leaders, companies and countries that do this successfully – through ethics, responsible practices and, yes, healthy regulation – will participate in a new golden age of the Code Rush.

This blog was co-written by Ben Pring, Vice-President and Director of Cognizant’s Center for the Future of Work.

Robert Hoyle Brown is an Associate Vice-President in Cognizant’s Center for the Future of Work and drives...